This week: Get both books in the Tesla series for only $1.98!

There’s nothing like waking up to a deal, am I right? Like that time you practically STOLE that Spice Shelf from Bed Bath & Beyond for only five bucks, and you walked out into the parking lot on a cloud, like you were Master of All Deals.

Well, I’ve got another one for you: pick up both e-books in the Where the Hell is Tesla? series, that’s two complete novels, at 80% OFF, this week only. Ooooh yes: two life-changing master works of fiction (maybe that’s overstating it a little) for under two bucks. (BTW, you can also pick them up individually for only 99¢ each.)

Here’s what people are saying…

“★★★★★ Chip pukes frequently but never seems to eat. Is this some side effect of interdimensional travel?”
(I’m not kidding. That’s in an actual, real review on Amazon.)

“★★★★★ Both books in this series are very well written, original, and funny!”

“★★★★★ This series strikes me as just right. And the sequel is even more fun!” 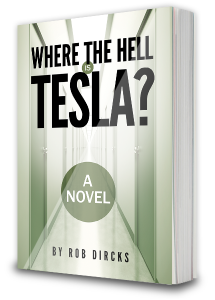 Book 1: Where the Hell is Tesla?

It’s a sci-fi odsyssey. Comedy. Love story. And of course… it’s got Nikola Tesla. I’ll let Chip, the main character tell you more: “I found the journal at work. Well, I don’t know if you’d call it work, but that’s where I found it. It’s the lost journal of Nikola Tesla, one of the greatest inventors and visionaries ever. Before he died in 1943, he kept a notebook filled with spectacular claims and outrageous plans. One of these plans was for an “Interdimensional Transfer Apparatus” – that allowed someone (in this case me and my friend Pete) to travel to other versions of the infinite possibilities around us. Crazy, right? But that’s just where the crazy starts.” 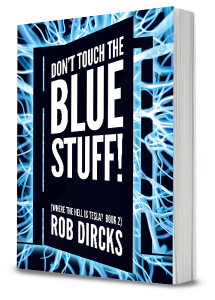 The sequel to Where the Hell is Tesla? is HERE! AND SOMETHING CALLED THE “BLUE JUICE” IS COMING. FOR ALL OF US.

Luckily, me (Chip Collins), Pete, Nikola Tesla, Bobo, and FBI Agent Gina Phillips are here to kick its ass, and send it back to last Tuesday. Maybe. Or maybe we’ll fail, and everyone in the multiverse is doomed. (Seriously, you might want to get that underground bunker ready.) Either way, I’ve got to get home to Julie and find out… woah, I’m not about to tell you that right here in the book description! TMI.

WARNING: If you haven’t read Where the Hell is Tesla?, I apologize in advance, as you might get completely freaking lost. If you do, just call my apartment, I’m usually around, and I’ll fill you in. (If I’m not stuck in the ITA.) – Chip