It’s a sci-fi odsyssey. Comedy. Love story. And of course… it’s got Nikola Tesla. Through two adventures -- Where the Hell is Tesla? and Don't Touch the Blue Stuff! -- you've followed Chip, Pete, Nikola Tesla, Bobo as they try (and mostly succeed) to save the multiverse. And now, the ultimate threat rears its ugly-ass head: The PARADOX.

For this third book in the trilogy, Gigi Make Paradox (coming June 2019), I'm exploring a redesign of the book covers. I would LOVE your input! Which one do you like? And why? (Just leave a comment, or go to the contact page on robdircks.com and leave me a note.) Thanks!!! 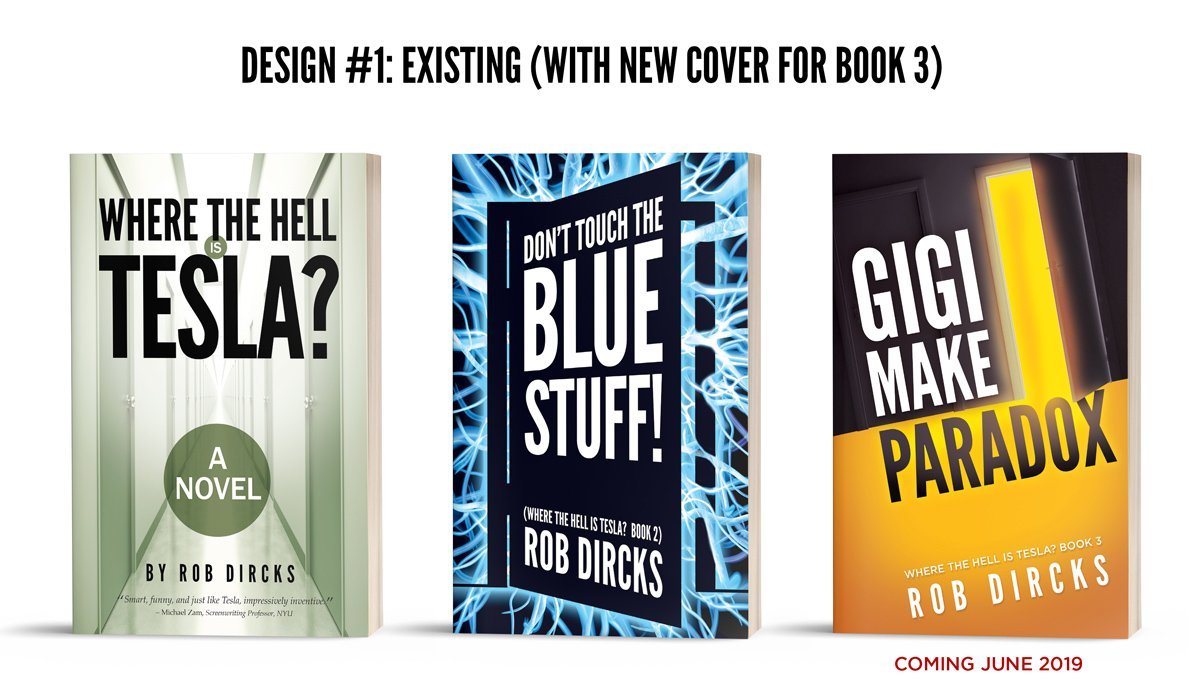 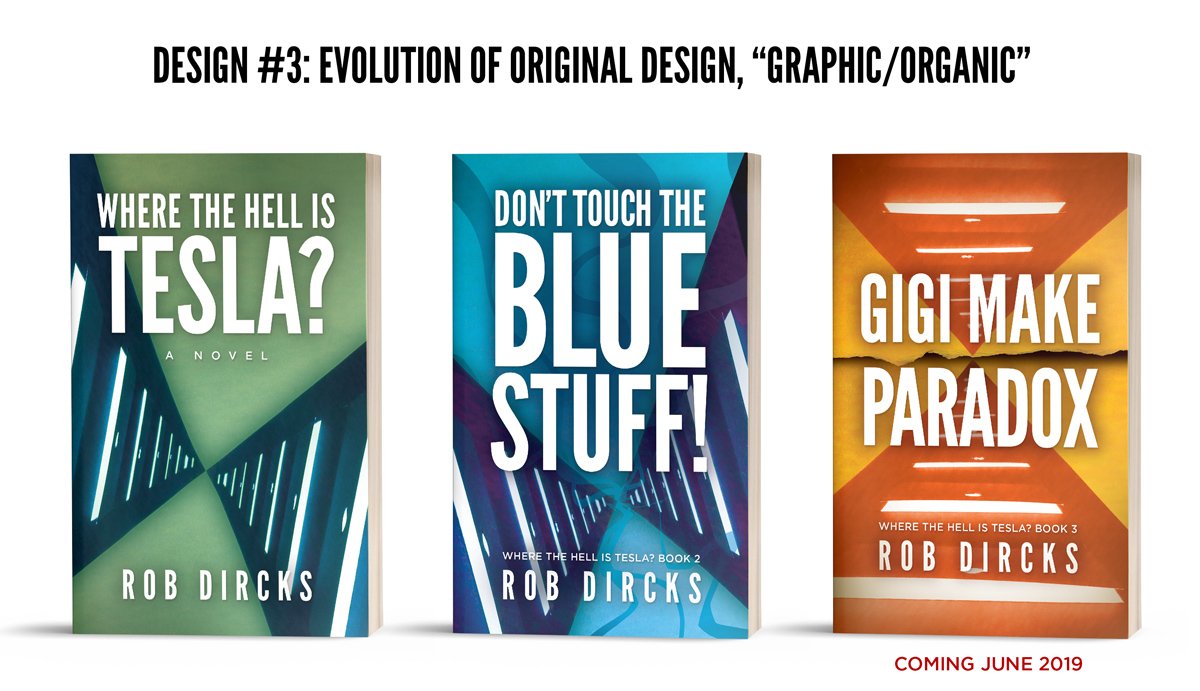 You can purchase Books 1 and 2 now in Audiobook, Ebook, and Paperback formats:

SCI-FI ODYSSEY. COMEDY. LOVE STORY. AND OF COURSE… NIKOLA TESLA. I’ll let Chip, the main character tell you more: “I found the journal at work. Well, I don’t know if you’d call it work, but that’s where I found it. It’s the lost journal of Nikola Tesla, one of the greatest inventors and visionaries ever. Before he died in 1943, he kept a notebook filled with spectacular claims and outrageous plans. One of these plans was for an “Interdimensional Transfer Apparatus” – that allowed someone (in this case me and my friend Pete) to travel to other versions of the infinite possibilities around us. Crazy, right? But that’s just where the crazy starts.”

"★★★★★ Without a doubt the funniest and craziest syfy adventure I've ever read... I made the mistake of reading this book in public and was laughing like a crazied mad man with tears in my eyes. NO BS. I had people glaring at me and hiding their children like I was some kind of lunatic. Great book. I can't wait to read more from Rob Dircks."

"★★★★★ LOVED IT! I loved this book! Hysterical, interesting, cool, just awesome. I flew through it in a few days and laughed the whole way through. I love sci-fi, I love humor and this is the perfect mix of both. Loved!!"

"★★★★★ We need more Bobo! Where The Hell Is Tesla? is one of the funniest books I've read in quite some time."

"★★★★★ Best comedy sci fi in a decade... a fun and hilarious romp through the multiverse with a group of very likable characters, witty and addictive writing."

"★★★★★ Rob Dircks' narrative style and his characters' surprising wit are a breath of fresh air for a genre that I have a great deal of love for but is all too often hit or miss."

"★★★★★  By far the most amusing, funniest and laugh-out-loud audiobook I have ever listened to!"

Don’t Touch the Blue Stuff! (Where the Hell is Tesla? Book Two)

SOMETHING CALLED THE “BLUE JUICE” IS COMING. FOR ALL OF US. Luckily, me (Chip Collins), Pete, Nikola Tesla, Bobo, and FBI Agent Gina Phillips are here to kick its ass, and send it back to last Tuesday. Maybe. Or maybe we’ll fail, and everyone in the multiverse is doomed. (Seriously, you might want to get that underground bunker ready.) Either way, I’ve got to get home to Julie and find out… woah, I’m not about to tell you that right here in the book description! TMI.

WARNING: If you haven’t read Where the Hell is Tesla?, I apologize in advance, as you might get completely freaking lost. If you do, just call my apartment, I’m usually around, and I’ll fill you in. (If I’m not stuck in the ITA.) – Chip

"★★★★★ An amusing and unexpectedly crazy ride - a perfect and hilarious follow-up to Where the Hell is Tesla?" - AudiobookReviewer.com

"★★★★★ An incredible, madcap adventure that only Dircks could deliver. The "Tesla" books are living proof that original stories are still out there waiting to be discovered."

"★★★★★  I love this series! It gets better and better. Love wins! If you haven't read Where the Hell is a Tesla?, you must. You'll love both. I promise. Thank you Mr. Dircks!"

"★★★★★ So damn funny and insanely entertaining! Loved the first one and this was just as fun."

"★★★★★ You never know with sequels... Fortunately, you don't have to worry about this one. Dircks' second in the Tesla series delivers every bit as well as the first - in the same balls-to-the-wall writing style that made the first book so entertaining."

"★★★★★  There isn't another writer like Rob Dircks in the entire multiverse."

"★★★★★  The CHIP MASTER IS BACK. My second favorite of all audiobooks I've ever listened to... only because Where the Hell is Tesla? is number one."